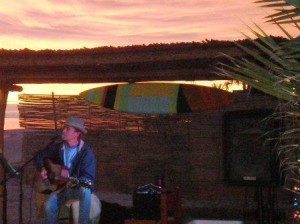 Local musician, Eric Holland is an Arizona Native. He has a Masters of Education in Bilingual studies. Eric’s ESL students helped target his inspiration and ideas for the ballads and dime-store ditties on his debut CD “Without Borders”.

You can watch Eric play throughout the week at several local restaurants. For an up-to-date schedule, please see the most recent Newsletter.

a Spanglish perspective of the life and death of Emiliano Zapata and his mysteriou romance of 1910
http://www.youtube.com/watch?v=UgFssbuyzCA