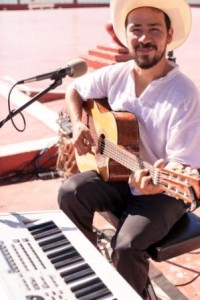 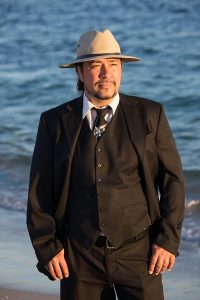 Omar Arriaga, local Sonoran musician from Ciudad Obregón, studied Piano and Music at the National Conservatory of Music in Mexico City.  Has worked and performed solo and in ensembles in many venues, for many years and different styles and instruments.  His instruments are:  Piano, Organ, Guitar,Ukulele, Voice, Harmonica, Acordion and Bass Pedals.  His shows include:  Instrumental Piano, Guitar & Vocals in English, Spanish & Portuguese, the Playeros Duet with Ukulele & Jonathan Ayón, the Sonora Jazz Quartet, the Silent Comedy Movie Show with Live Piano Music, and other projects mainly in San Carlos, but sometimes other locations too.  He does also music recording, arranging, teaching, catholic masses, private & public parties, festivales and events.
Contact Omar
Web: OmarArriaga.mx
Facebook: Omar Arriaga Music
Instagram: OmarArriagaMusic

You can watch Omar play throughout the week at several local restaurants. For up-to-date info, please also see the most recent Newsletter.

One of San Carlos’ most popular musicians, Omar Arriaga, has been awarded a grant by the State of Sonora to compose a symphony! Best known for his piano and guitar solo performances at various San Carlos venues, and his work with the club bands Utopia and Bohemia, Omar plays and sings in diverse musical styles, including classical, traditional, jazz, Mexican, rock, movie themes, and ragtime, and improvises as well, as anyone who has heard him perform as he accompanies his silent movies Monday evenings at the Captain’s Club will know. And while he may be having fun at these public performances, Omar takes his music seriously. He studied at the National Conservatory of Music in Mexico City for four years, and recently composed and recorded an anthem for orchestra and chorus, so he was well qualified to present his winning proposal for “Sinfonia Yaqui” to the Instituto Sonorense Para La Cultura Y Las Artes, the same government organization which organizes the annual Alamos Festival.

Omar plans to base his composition on Yaqui melodies, rhythms and instruments, mixing ancient Sonoran music and dance rituals with modern concert presentation, thereby updating the ethnic traditions and making them more accessible and popular for today’s audiences. He will be traveling to Yaqui communities throughout southern Sonora, soliciting their support and participation.

This month, Omar will receive recognition of his winning proposal and the first installment of his grant at a formal presentation in Hermosillo, together with 13 other recipients of awards in all areas of the arts. Within one year, he will present the Institute with a completed master score for the Yaqui Symphony, and receive an audition of a recording of his composition. Omar plans to perform and record every part of the entire symphony on his synthesizer in his home studio in the Ranchitos. After his audition in Hermosillo, he hopes to bring his work to the attention of the director of the Sonora Symphony Orchestra, and after that, perhaps even the National Symphony in Mexico City. This will be a very busy year for Omar, as he plans to continue to perform at as many local venues as possible, while composing his symphony. But it will all be in aid of following a dream he has had for a long time. As he enthusiastically said, “this is an exciting opportunity for me to become recognized as a composer, and to take my music career to a whole new level”.